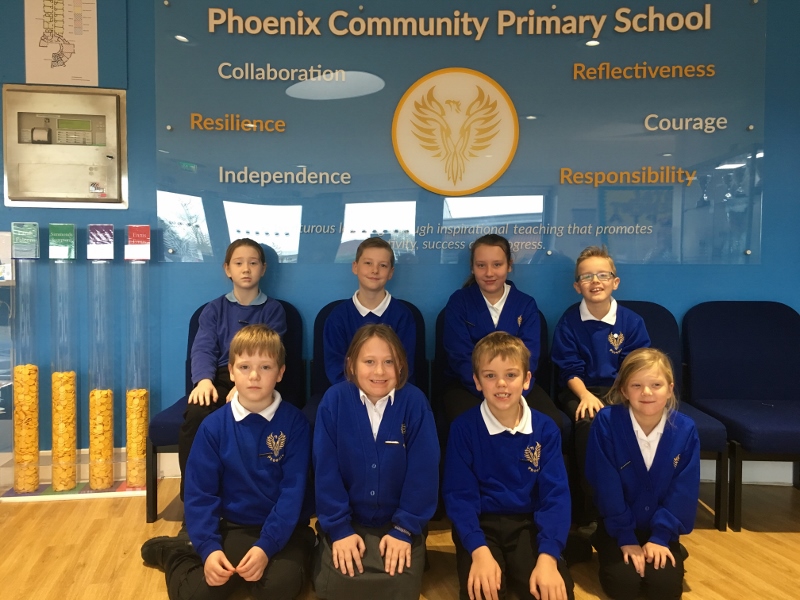 At Phoenix we have a School Council.  This is made up of 2 children from each class Years 2 – 6. Class Representatives are voted in by their classmates after they have shared what qualities they possess to make an effective representative.

Our School Council is a forum for all pupils to have their say; there is a School Council Suggestion Box in all KS2 classes so every child can raise an idea.  Class representatives present ideas/suggestions from their classmates at School Council meetings and have an opportunity to report back to their class following the meetings. We have a School Council Meeting every term with Mrs Geering.

Last year's School Council had a busy year with fundraising, purchasing new equipment for the school and assisting with appointing new staff.

For Red Nose Day, the children decided to sell red noses to pupils and staff during break and lunch times, this raised £170. In addition to this, they made £75 by organising a non uniform day. The children in School Council were moved by the earthquake disaster in Nepal, particularly after speaking to pupils who's families were from Nepal and who were affected by the earthquake. Through arranging a non uniform day, cake sale and creating a giant map of Nepal (using pennies) they raised £333.91. Members of the Nepalese Elderly Community met with the School Council on the fundraising day and thanked them for their hard work.

Mr Tibbles gave the School Council £500 to spend on items to improve the school. After consulting with their classes they decided to purchase; new annuals for the library, a new bumble bee cushion for the library and dressing up clothes and hats for the playground. They also discussed with Mr King the need for outdoor water fountains which he then fitted during the May school holidays with the remainder of their money.
School council were very important members of the selection panel for appointing two new teachers. They asked challenging questions and fed back to Mr Tibbles and the school governors on who they thought should be appointed.

Well done to the school council for all their hard work last year.